Global semiconductor revenue growth accelerated again to 18.1% during Q1 2017 vs. Q1 2016 (SIA), following 12.3% growth in Q4 2016. There’s more good growth forecast in the Semiconductor market, with increases in both DRAM and NAND pricing and Gartner raising its forecast for 2017 semiconductor revenue growth to 12% (from a previous 7.2%).
This robust semiconductor industry performance is reflected more modestly in the Q1 2017 quarterly EDA results. Synopsys grew revenues by 12.4% Q1* 2017 vs Q1* 2016, while Cadence reported steady consistent 6.5% growth: 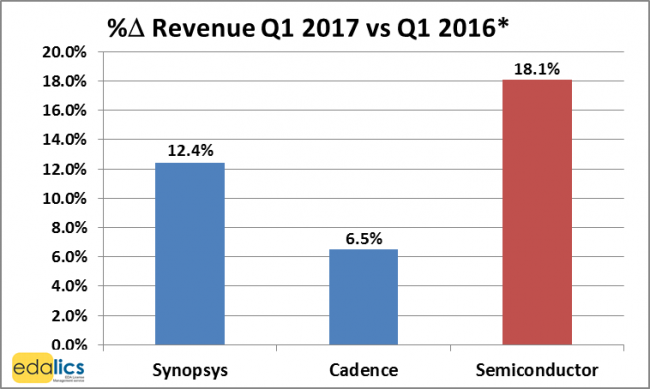 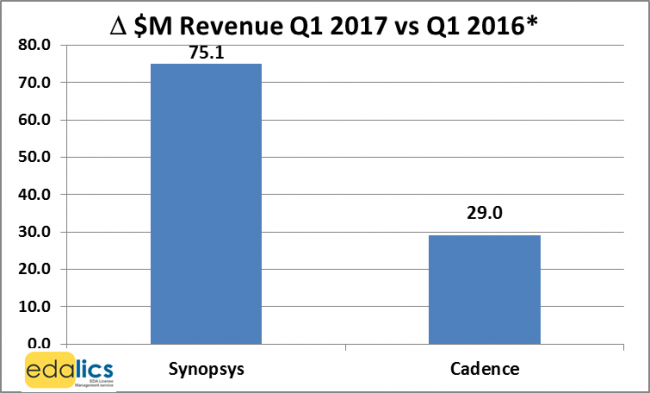 Guidance for the current quarter 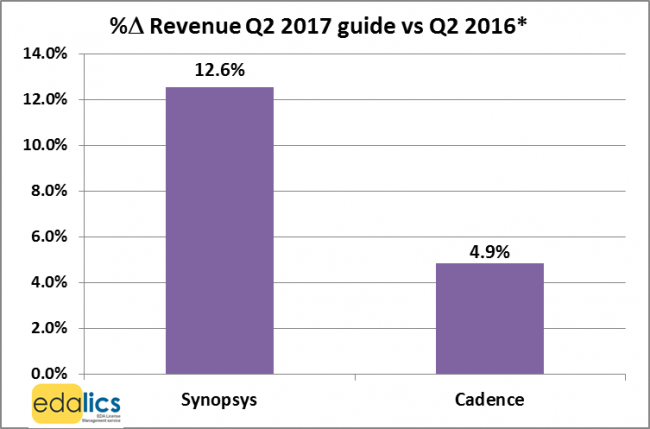 In summary, Q1 2017 global semiconductor revenue grew very strongly to a new all-time record for the first quarter of the year at $92.6 billion, up 18.1% versus Q1 2016, while Synopsys and Cadence achieved 12.6% and 6.5% growth rates respectively. The EDA companies own guidance for Q2* 2017 is for Synopsys to grow revenues 2.5 times faster than Cadence (at 12.6% versus 4.9% growth rates respectively).

These charts are an extract from edalics’ quarterly EDA Market Executive Briefing, which provides a deeper analysis of product segment revenues, exploring the reasons behind and implications of quarterly revenue trends. It provides a comprehensive, but concise quarterly summary of EDA market news and statistics for all managers with EDA budget responsibility, whether in Engineering, Purchasing or Finance departments. For more details see: EDA Market Executive Briefing

*Based on each company’s reported financial quarterly data which most closely match that calendar quarter.